New Orleans Legendary Walking Tours is dedicated to showing visitors the very best that New Orleans has to offer. During any walking tour of the French Quarter, cemeteries, or Garden District, you will see sights unique to the Crescent City that you will find in no other part of the country. All of our tour guides are local, certified, and passionate about New Orleans history and culture. We take pride in offering tours that are not only entertaining, but also historically accurate and informative.

We are a Pelican New Orleans company, founded and operated by locals who are passionate about the Big Easy. We remain a proudly family-owned company.

Explore the secrets of New Orleans firsthand as the city’s most knowledgeable tour guides bring history to life. We can’t wait to share our love of the city with you.

Omar Iriarte
Omar Iriarte has a passion for the French Quarter for many reasons, but mainly because it is similar to where he grew up in Lima, Peru. In fact, he was a tour guide in Lima as well, and has been travelling back and forth between family in both locations for the past 10 years. From the unique culture and expansive history to the Spanish architecture and focus on cuisine, Lima and New Orleans have more in common than many might know. Omar loves to draw his French Quarter walking tour guests’ attention to these similarities that come as a result of past Spanish rule and occupation. Omar has conducted walking tours, bike tours and cocktail tours in both Lima and New Orleans, and is happy to help the Spanish-speaking visitors to New Orleans with bi-lingual tours.

Omar studied hospitality management and tourism in Lima in an effort to learn how to better share his knowledge of history and culture with travelers, as well as his own personal penchant for travelling. He interned in Vermont, then in New Orleans where he met his beautiful wife, Tracy, of 9 years, and now has a beautiful 5 year old daughter. He is a big fan of local seafood, often splurging on the bountiful oysters and shellfish served in Nola, and sampling new gumbos as often as possible. He enjoys watching NLF games, being both a Saints and a Patriots fan. He also loves to swim, and remembers many the day in Lima when his Mother would tell him “don’t go too far”, but that never stopped him from swimming several miles out to sea and returning to an earful from Mom! But Omar says it was worth it for the sense of freedom that the open water brings. Omar highly recommends taking in the views of both the Mississippi River and Lake Pontchartain to visitors, but don’t leave without a great historical walking tour of the French Quarter!
Stephen Medina

Stephen was born close to Bayou St. John in the Mid-City neighborhood. He has previously worked at two local PBS TV stations, which greatly encouraged his love of learning. Also, working at two different airlines allowed him to travel all over our country, and the world. Having had to evacuate for Katrina, as most New Orleanians did back in August of 2005, when he eventually returned home, he decided to do something different- be a tourist in his own hometown. And he’s sure glad he did! Many of the locals in New Orleans, especially those born here, never experience all the unique historical and cultural assets this city is known for by millions of visitors who come to the Big Easy each year. By exploring the city from a different perspective, one of a quest for knowledge, he was born again, so to speak, and really gained an insatiable interest in learning more and more about the city and its history.

As a tour guide, Stephen says the best part of his job is that he gets to walk the amazing streets of the French Quarter, simply sharing the home he loves with great people from all over the world. The opportunity to showcase his birthplace by giving of himself the vast amount of historical and cultural knowledge he possesses, and continues to expand as often as possible, is what drives Stephen’s passion for being a great guide that people will rave about for years to come. He is known to really engage with his guests and provide a thoroughly informative and fun tour. He says that being a tour guide has given him the chance to “return the favor” when people come to visit us here, considering all people who welcomed him to their cities and homes when he travelled himself. Actually, his mother was a tour guide as well, and his father was a family physician and assistant coroner. He is forever grateful to them for sharing their love of walking the streets of our city and its cemeteries. The more he learns about the history of both its good guys, and its scoundrels, the more his love for New Orleans is reinforced.

If he could be anywhere in the world, Stephen would be in an airport with a free flight card. That was the greatest perk of working for the airlines for him. He’s enjoyed getting to experience the cultures of Asia, Europe and the Americas, and discovering how welcoming the people around our world can be. In keeping things close to home, however, he just loves Royal Street, telling his guests it’s his favorite street in the world! And New Orleans wouldn’t be New Orleans without City Park, another world favorite right in his backyard. Stephen also looks forward each year to the Endymion parade for Mardi Gras. With the family atmosphere, incredible floats and awe-inspiring bands, well, just “oh my!”. But on Mardi Gras day, Stephen says you just have to walk down St. Charles to enjoy the parade crowds with all the diverse people having so much fun.

From storytelling, character acting, Vaudeville and mural painting (with a BFA in Fine Art/Sculpture) to stilt walking, fire dancing, go-go dancing and burlesque, Shannon has always been a versatile performer. Bringing intensity and dancing in the deep end of the emotional pool, her passionate performances are dramatic and tend to “rip your heart out and put it gently in your lap”. This is why, early in her performance career, she was deemed “The Mysterious Lady Shanime.” Why the name Shanime? Her mother’s side of the family is Japanese, and her performances are influenced by Kabuki, mythology, and Anime. Shannon plus Anime equals Shanime. Since she prides herself on being a lady, well, there you go.

From a young age, this lovely lady has always colored outside the lines. No really?! She was held back in kindergarten because she couldn’t color inside the lines! Originally from San Jose/San Francisco Bay, she has since lived in Portland, Denver and Memphis. In 2016 she travelled to New Orleans with her husband, Jeremiah, to start a new adventure. Since she was young, she has always been a storyteller. For over 20 years, her stories have been conveyed through her paintings and live performances. Shannon also has a profound love of history, and in 2007 created a WWII installation and art show, raising money for Denver Kunming Sisters City committee. She invited one of the Flying Tigers to talk at her WWII Art show. She interviewed veterans for 5 years and created historical art for 8 years. She also travelled to Washington DC for the National WWII Monument opening, and then to Normandy for the 60th Anniversary of D-Day. Yes, this lady loves history! During this time, she also had her own mural business recreating historical photographs, painting them on walls in businesses and private residences.

Her first few months in New Orleans, Shannon worked as a stilt walker, burlesque performer and character actor. She began to explore museums and learn about the history of New Orleans. One day she saw a Visitor Center and decided to come in and inquire about a job. She literally asked, “I want to work in tourism, how do I start?” She got an interview right then and there, and was hired on spot. Shannon became a concierge, moving to both supervisor and manager positions. It wasn’t until October 2020, that she made a difficult decision to step back from management and enter into the world of tour guiding. Today, she loves taking travelers from all around the world through the historic French Quarter, educating them on New Orleans historical folklore and hauntings. She has always had a taste for the bizarre and unexpected, and New Orleans has truly fit that bill.

Shannon’s favorite quote: “The only way to make sense out of change is to plunge into it, move with it, and join the dance.” – Alan Watts 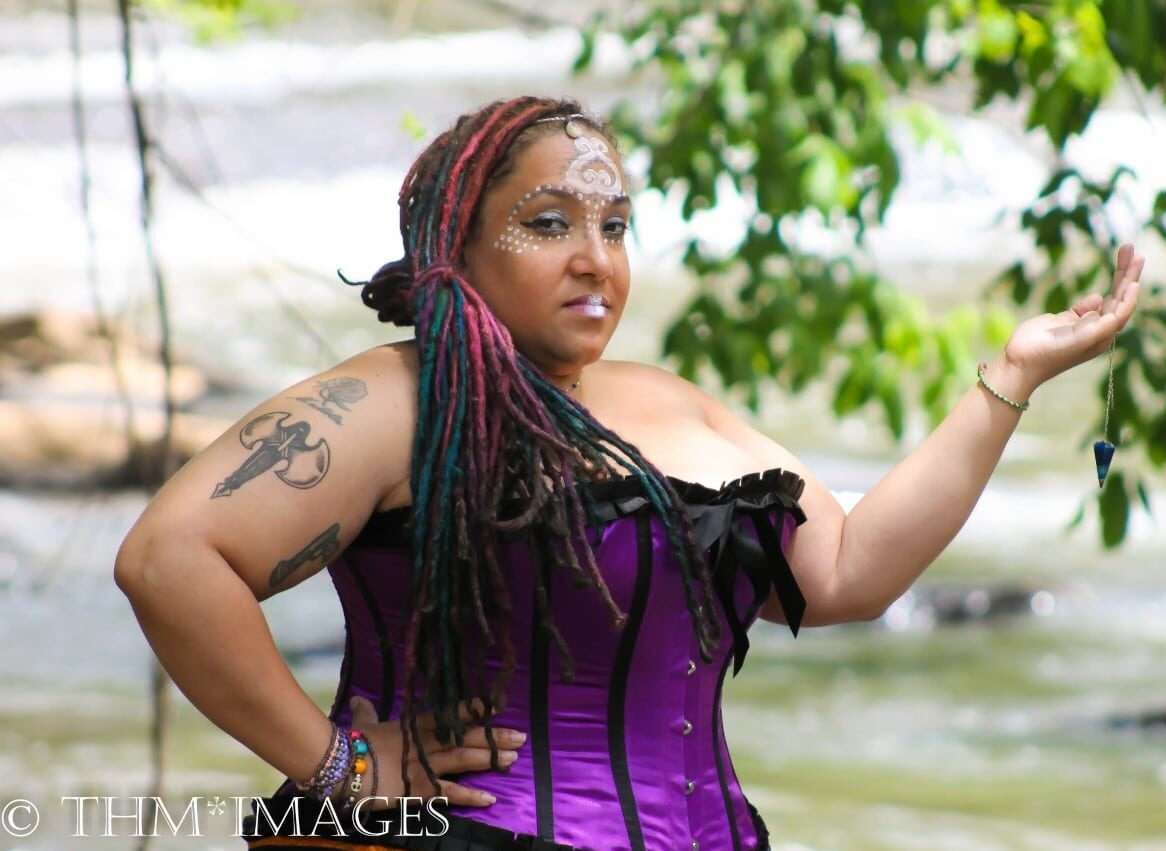 Malika’s passion is sharing the history and folklore of Southern Louisiana, which has informed most of her performance work since 2016.

Malika is a Sode in Ifa, an Olorisa of Oya upon completion of initiation at Temple Yemoja in Ibadan, Nigeria in 2019, and High Priestess of Louisiana Plantation Vodou as of December 2021. She’s been an eclectic Conjurer since she began praying to the moon at 14. She’s read tarot cards for 23 years, and cowries for 8.  She is also a proud member of the choir at First Grace United Methodist Church in Midcity New Orleans; she sees this as the honoring of as many branches of her ancestry as possible.

Malika holds a B.A. in Arts Management-Music from Bennett College in Greensboro, NC (HBCU PRIDE!), and a Masters in Music Education, focused in Choral Conducting and Ethnomusicology from Georgia State.

As a docent for the Louis Armstrong Foundations, Inc. Robin assisted the foundation with the research and preservation of the history, culture, traditions, music, and dance of the Black Creole’s of Louisiana. Robin has had the privilege and honor to study with some of the most profound Historians in Louisiana. Her passion for history landed her an opportunity as an oral historian on Evergreen Plantation, Edgard, LA. One of the largest and most intact plantation complexes in the South. Robin is one of the leading contributors to the preservation of Louisiana history, in addition to serving as a Cultural Ambassador for the city of New Orleans.

While focusing on preservation and research Robin obtained her Professional Tour Guide License. When Robin is not preserving history, she is enjoying all things fitness. Robin is also a Health & Wellness Consultant that designs work site wellness programs for employers.

Jane Varnado (French spelling Jeanne Varnedeau) has been a Licensed Tour Guide for the city of New Orleans and a member of the Tour Guides Association of Greater New Orleans since 2019. A 2022 graduate of the University of New Orleans and the esteemed Friends of the Cabildo French Quarter Tour Guide class, Jane’s dedication to learning has contributed to her success as a tour guide. Writing, acting, entertaining, and storytelling are part of Jane’s DNA. Drawing from her experience and skills as an actor, Jane enjoys sharing the history of New Orleans in an engaging and entertaining manner.

People often ask Jane if she is a native New Orleanian. While Jane did not grow up in New Orleans, she is a native Louisianian having grown up in an area of southwest Louisiana that many call Acadiana. The people that live there are called Cajuns, which is a corruption of the French word Acadian pronounced Ahcajan. Her family history dates back to 16th century Normandy, France whose ancestors after being sent to New France (Canada) were deported from Acadia, current-day Nova Scotia to southwest Louisiana in the mid 1750s.

Jane moved to the Big Easy at the ripe old age of 21, fell in love with the city and a native New Orleanian, and gave birth to three native New Orleanians. She briefly lived in Nashville but the city called her back home and she has never considered living anywhere else. Jane may welcome you by opening her tour with Bienvenu a la Nouvelle Orléans — Welcome to New Orleans!